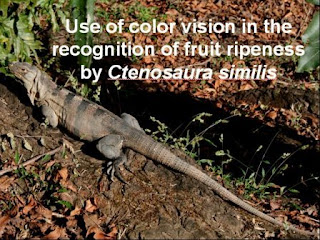 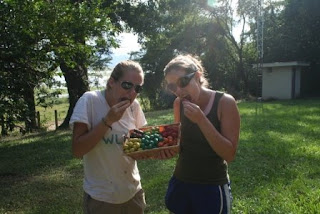 Our second week at Palo Verde was independent projects, take two. This time, I worked with Becca, who is a junior at Bowdoin College in Maine. After researching and planning for a few days, we decided to study the use of color vision in the recognition of fruit ripeness by Ctenosaura similis. Ctenosaurs are a species of iguana that are abundant at Palo Verde. It has been shown that they use both color vision and scent in making foraging decisions, but the importance and interaction of these senses in recognizing fruit ripeness was unstudied.

Our initial questions were:
I: Does Ctenosaura similis use color vision to differentiate fruits based on ripeness?
II: When equal “I’m yummy” olfactory cues are present, does C. similis differentiate between ripe and non-ripe colors?
III: When color cues contradict olfactory cues, does color preference prevail?

Thus, the final paragraph of my final paper's introduction was as follows:
In this study, (1) we examine the ability of Ctenosaura similis to differentiate between ripe and unripe fruits using color vision. Here, we predict that C. similis will show preference for ripe-colored fruits in the absence of olfactory cues. (2) We then assess whether C. similis differentiates between ripe and unripe fruit colors in the presence of equally attractive olfactory cues. By comparing preferences shown in (1) and (2), we determine whether the role of color vision changes when chemosensory cues are available. Finally, (3) we examine the relationship between color cues and scent in the foraging decisions of C. similis, with the goal of assessing the relative importance of each cue and by what factors is it influenced.

To examine the first question, (I) we made fruit models by covering pebbles with colored plasticine (nontoxic clay). Sets of three ripe-colored and three green fruit models were placed in areas frequented by ctenosaurs, and the number of bites on each color was recorded after approximately eight hours. 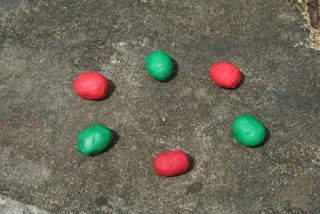 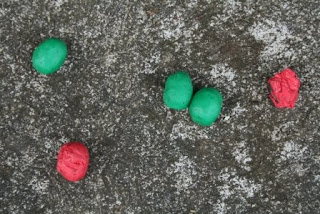 (II) In the second phase, we presented ctenosaurs with a choice between a ripe-colored and green banana slice (dyed with food coloring) and recorded which banana was eaten first. 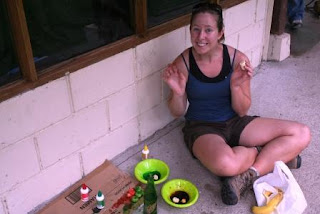 (III) In the third phase, we presented ctenosaurs with a choice between a red fruit model and green banana and scored which was (a) approached first and (b) bitten first. 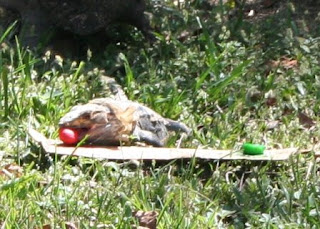 Data collection for our project was fun, hilarious, and very successful (unlike my last project!). Setting out the plasticine fruits took forever, but we got a lot better at knowing where to put the fruits so as to get the most data. Collecting the banana data was highly entertaining - we would first find a ctenosaur, then sneak toward it and set a piece of cardboard with fruits on it as close as possible without the ctenosaur running away. We would then wait and watch from a far-away vantage point and record what the iguana did. Repeat, repeat, repeat. We often named our test subjects after the place where we found them - for instance, we had dock lizard, log lizard, dining hall lizard, gift shop lizard, library lizard, field lizard, and about twenty woodshed lizards. Data collection continued for five days, and on the sixth began data analysis, presentation-making, and paper-writing.

Results & Conclusions
Our results actually turned out to be really interesting and pretty cool.
(I) In the first phase, ctenosaurs strongly preferred red, yellow, and orange over green, but showed no preference for light green over dark green. None of our seventeen brown vs. green fruit model setups received bites. From this we concluded that lizards do, indeed, use color vision to forage selectively on ripe fruits. 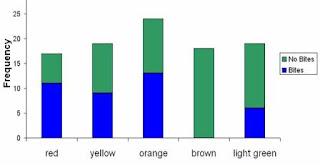 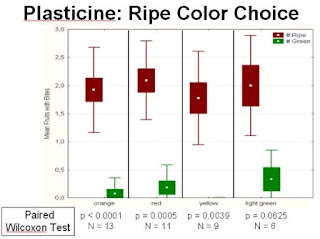 (II) In the first phase, lizards strongly preferred red, yellow, orange, and brown dyed bananas over green, but showed no preference for light green over dark green. From this we concluded that because brown is a common color in the forest (rocks, dirt, feces, etc.), brown is not recognized as a ripe color unless coupled with positive olfactory cues. (We nicknamed this the "Don't Eat Poop" theory.) We also concluded that light green probably represents an unripe or ripening fruit, and thus an unprofitable or only marginally profitable food item. 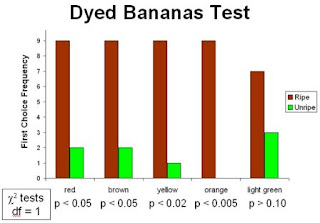 (III) In the third phase, no difference was observed in whether the red clay fruit model or green banana was approached first, but lizards consistently ate the green banana before biting the red clay. We thus concluded that from a distance, olfactory cues and color vision interact to determine fruit ripeness, but that olfactory cues prevail at close range. 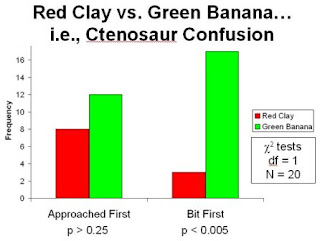 Hi Hilary,
i did an study with fruit colour prefernces by lizards i the Mediterranean basin, near of Mallorca Island. I consider seed dispersal factors and their effects on colorur polimorphism manteinace. MI question: yo have a paer or manuscript of your work?????
if you have something this can help my a lot!!!!
gracias, cotiledonn@gmail.com

July 26 - August 17:
London, Scandinavia, Estonia, Germany, and Russia
cruisin' it with the fam.